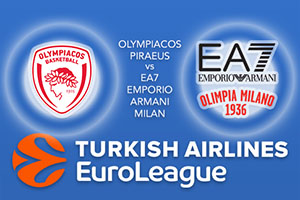 These two teams have a strong pedigree in the Euroleague, and they both come into this game on the back of a win in Round 2. This means we should see a good game between two sides full of confidence, which could make this one of the most interesting, and hopefully exciting, basketball games of the week.

Olympiacos Piraeus won at home in Round 2 and they’ll be delighted to be at home again in the third round of the regular season. They know that they have a good record against Milan this century, holding a 9-3 record against their Italian opponents, and they won the last time the two sides clashed in Greece. This is positive but there is more to be said for the scoring exploits of Vassilis Spanoulis who is currently averaging 14.5 points per game this season for the hosts. He is currently being assisted by Matt Lojeski with 14 points per game and Georgios Printezis who has averaged 13 points a game. The hosts have a height advantage over the Italians and this could impact on the game.

Milan will want a third win this season

The Greeks are big favourites for this game. You can see how Olympiacos can grab a win but it may be tighter than the bookmakers predict. Take EA7 Emporio Armani Milan at +8.5 which is available at odds of 1.90. For the Over/Under market, look to go UNDER 159.5 which you can find at odds of 1.90. Bet Now!