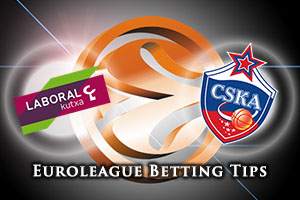 This is a game between two teams who have a rich history of facing each other, indicated by the fact that this is the 25th time these two teams have met since 2000. This includes two Euroleague semi-finals and two play-off matches. The history will count for little on Thursday night but if you like big games between big basketball teams, this is a game to look out for.

The hosts hold a 1-2 record in the Top 16 so far and they have a 7-6 record overall in Europe this campaign. Laboral haven’t been at their best but they still have players who can make a difference. This is seen by the fact that the team lies third with respect to rebounds in the Top 16 and they have the highest ranked rebounder in the competition. Ioannis Bourousis has averaged 8.8 rebounds per game and he is currently ranked second in the index rating, with a score of 20.9 PIR. Darius Adams and Adam Hanga are other key players for the home team but Bourousis has been the most influential player of the campaign by far for the hosts.

If the hosts have the second ranked player in the index rating, don’t expect CSKA Moscow to be overly concerned because they have the top ranked player, Nando De Colo. De Colo has a score of 22.7 PIR but he was absent last week and he may be unable to take part in this game on Thursday night. However, as instrumental as De Colo is, CSKA Moscow have a very strong team and they should be able to deliver a strong performance even if he is absent. Milos Teodosic has also been in great form this campaign and he, alongside players like Cory Higgins and Vitaly Fridzon can make a difference in this game if they have to.