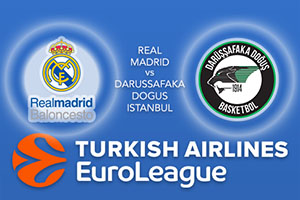 The opening game in this best of five series may not have ran as smoothly as the hosts were hoping for but the Spanish side escaped with a win, and they’ll be looking to consolidate their position at the end of this midweek. If Madrid carries a 2-0 lead to Turkey next week, they’ll be confident of finishing the job, but there is a lot of basketball to be played before this content will be over and done with.

At one point in the first half of Wednesday night’s game, the Spanish side were trailing by 12 points and heading into the final moments of the game, there was only three points between the teams. However, the Spaniards stuck in and they managed to get the victory that sets them up for the rest of the series.

Sergio Lull, as he has done for most of the season, led by example and he provided a total of 23 points and 6 assists. Gustavo Ayon was a big player with 14 points and Anthony Randolph added the Madrid cause by providing 9 points, 7 rebounds and 3 blocks. This indicates the fact that Madrid are a side with many key players making their point, and it is this strength across their squad that could make all the difference on Friday night in the second game of this Euroleague Playoff series. Madrid got 31 points from their bench on Tuesday night, so that is definitely something to look out for.

The thing is though, Darussafaka also had a number of big performers in Game 1 of this series and these are the players that will look to make a difference on Friday night. Brad Wanamaker has been at the heart of so much for the Istanbul side this season and he provided 21 points while Will Clyburn offered 15 points in the win.

This game could go in a number of different ways, and while the opportunity for Madrid to have a big night exists, there is a chance that this could be a tight affair. Look to take Darussafaka Dogus Istanbul at -9.5 at odds of 1.90. If you’re looking for the Over/Under market, go UNDER 164.0 which is provided at odds of 1.90. Bet Now!