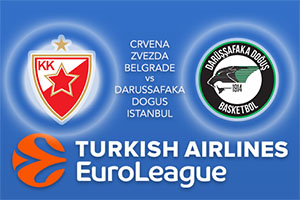 This is the sort of game that may not look too exciting on first glance but then turns out to be a fantastic evening of basketball. The first home game of the season is always a thrilling time but for the Belgrade side, this is a chance to get back into action after a very good season last year. The away team is also tipping off a new era, so there will be plenty to look forward to in this.

There will be plenty of players for the home fans to get behind on Thursday night. Stefan Jovic is a big favourite in Belgrade and he’ll be looking towards players like Marko Simonovic, Marko Guduric and Charles Jenkins to bring the spark that will ignite this crowd. Big things are expected from new signing Petar Rakicevi although he may be one for the future as opposed this season. The exploits of last season will still be in the mind of the Belgrade fans, and this is likely to drive their expectations and hopes for the new campaign.

Istanbul are making a move this season

This is the second consecutive Euroleague season for the Istanbul side and they will be keen to grow and develop this campaign. They have made a bold move by bringing in David Blatt as their head coach. Blatt has been absent from the Euroleague since he led Maccabi Tel Aviv to the title in 2014. Things may have changed slightly in this period but Blatt is expected to boost Darussafaka and this will be a fantastic chance to get some insight into what to expect from the team this season. Players like Will Clyburn and Adrien Moerman should make their mark while Luke Harangody will have a lot of expectations placed on him.

There are arguments to be made for both sides in this game and it looks as though the bookmakers are backing the team from Istanbul to grab a win in Belgrade. This isn’t out of the question but the hosts will be well up for this game. Take Crvena Zvezda at +4 which you’ll find at odds of 1.90. Anyone that is keen to enjoy the Over/Under market for this game should look to go OVER 150.5 which is provided at odds of 1.90. Bet Now!