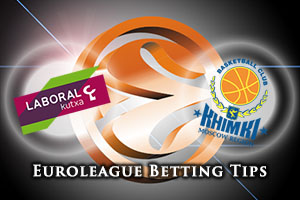 Currently sitting second in Group F, Laboral will be looking to build on the 6-3 record that they have. There are some big names below Laboral in the table but if the Spaniards keep on winning, there is not an awful lot that teams below them in the table can do about it. The hosts have a very strong defensive record when playing at home, giving up an average of 70.5 points per game in the Top 16, so they will fancy their chances if they are able to reach the level of what is expected from them. Ioannis Bourousis has been in fine form this season and if he can continue this in this game, Laboral will be looking good.

Khimki won the last meeting of these two teams

When the two teams clashed in Moscow, Khimki came out on top by a score of 76-68, so they have a good lead with respect to maintaining the head to head advantage. The Russian team will be going all out for the win but they’ll know that if they have to lose, it is best to keep things as tight as possible just in case the head to head becomes relevant later on in the campaign. That Moscow win was achieved with Alexey Shved having a brilliant evening, offering up 24 points in total. There was also a big showing from Tyrese Rice who managed to grab 13 assists, a career best for the player.

The hosts look to have the edge with the bookmakers so taking Laboral Kutxa Vitoria Gasteiz at -3.5, at odds of 1.90, is likely to be a decent bet. For the Over/Under market, look to go UNDER 163.0, which you can find at odds of 1.90. Bet Now!