The NBA Welcomes The World

While the NBA is the best known basketball league in the world, it is far from being the only basketball league in the world. There are plenty of great teams in different countries and continents, and sometimes it is good to remind American basketball fans of this. The FIBA World Cup will definitely play its part in reminding fans that there is a lot more going on in basketball outside of the USA, but it seems as though the NBA is looking to provide a reminder as well. This is because there will be a number of high-profile friendly matches in the NBA pre-season between league teams and opponents from around the globe.

Early October is when the games begin

The action gets under way on the 5th of October when the Cleveland Cavaliers welcome Maccabi Tel Aviv to the Quickens Loans Arena. This is an obvious game because it reunites Cavs coach David Blatt with the team he took to the Euroleague Championship back in May. Yes, Maccabi are the current champions of Europe, defeating Real Madrid in a stunning final in Milan earlier this summer. This means that it will be a really good barometer of how strong the European Champions are with respect to NBA teams, even if there have been some changes at both sides since the end of their respective seasons.

The Tel Aviv side will also be in action on the 7th of October when they head to Brooklyn to take on the Nets. The Tel Aviv side has a great sense of history and they have faced up to plenty of NBA sides in the past. In total they have played 20 games against the big league teams and in the 70s, they became the first European club side to play against an NBA team, when they welcome the 1978 NBA Champions, the Washington Bullets, to Tel Aviv.

Some Brazilian magic on its way to NBA fans 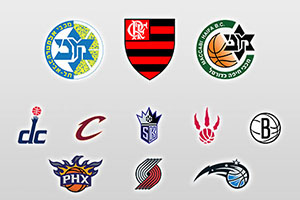 On the 8th of October, Brazilian side Flamengo play the Phoenix Suns while a week later, they play the Orlando Magic, on the 15th of October. Two days later, the South American side play the Memphis Grizzlies, on the 17th of October. Flamengo also come with a strong pedigree as they hold the 2014 FIBA Americas League Championship, an honour they clinched in March and then in May, they won their 3rd NBB title. These triumphs mean that Flamengo will be playing in the Intercontinental Cup in September, where their opponents will be the team from Tel Aviv. Both of these teams should be looking to scout their opponents while they are both in the same country. The game against Phoenix represents the first time Flamengo have faced NBA opposition.

Maccabi Haifa have a four game schedule, where they will play:

This is the fourth time in five years that Haifa have travelled to the States, with the Israeli team being frequent opponents to some of the best teams the NBA has to offer.

If US basketball fans want to see more players from around the world after the FIBA World Cup has concluded, these games provide the perfect opportunity.