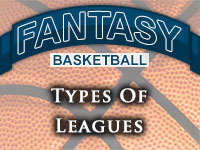 One of the most important things to look out for when selecting a league is the nature of how you pick players. There are two main options to choose from:

Given that the players you select for your team will be a very major component of any success or failure you may experience when playing fantasy basketball, the nature of how you select teams will be important.

When it comes to a draft league, the “owners” of the teams involved in the league will take turns in choosing their players. An order of draft will be created and most leagues using the draft style format will use a “snake” format for the draft. This means that the player that picks first in the opening round will receive the last pick in the second round. Conversely, the player that picks last in the opening round will receive the first pick in the second round and this pattern continues through to the end of the draft.

An alternative method for selecting players comes with the auction format. Every owner has a budget to pick players and they fill their team by “bidding” on individual players. In both of these formats, you will generally find that a player can only be drafted once. In some of the bigger tournaments where it would be impossible to bring all players together to undertake the draft quickly and conveniently, owners are often given a total budget and can fill their roster how they see best. These leagues will see the same player being made available to all teams, which means that different teams can have very similar line-ups and rosters.

Another thing to look out for when choosing a fantasy basketball league is the nature of scoring. Two of the most common options for leagues are:

For the Rotisserie style of play, each teams starts are totalled up and then points are allocated to the teams with respect to their ranking. As an example, for a league of 8 teams, the team that is ranked first in assists will receive 8 points, the team that is ranked second in assists will receive 7 points all the way through to the team in last place with respect to assists receiving just 1 point.

For the Fantasy Points style of play, points are allocated to different statistics. This means that a basket could be worth one point to that player, a rebound is worth one point while a player suffering a turnover may receive -1 points. While fantasy leagues for soccer and American football favour the Fantasy Points method, fantasy leagues for basketball will often favour the Rotisserie method.

Another way to differentiate between the teams in a league can be seen with the choice between:

If you are in a head to head league, your team will be competing against another team over a set length of time (normally one week) and this style of league will usually use the Fantasy Point Scoring method. The team who has picked up most points in that week wins the match-up.

For Cumulative Scoring, the Rotisserie Scoring style is favoured and the points are calculated on the statistics over the entire season.

When it comes to fantasy basketball and the fact that there isn’t a recognised game day in the NBA like other leagues (there are usually always games going on), daily transactions don’t usually take place. This means that there is a bigger focus on having your team-line scheduled for the week, meaning you have to set your line-up by a deadline and then your players earn points for you in their games that are played out in this scoring week. However, with internet access being so freely available, it is becoming easier to log in on a daily basis and there is a growing level of availability for daily transactions. If you are keen to play daily fantasy basketball, you can, just keep an eye out for the leagues that offer. With so many different games taking place in the NBA on an almost daily basis, regularly engaging with your team will provide you with a chance to rack up more points than people who just set up and leave. Of course, sometimes tinkering can be as bad as it can be of benefit when it comes to racking up points or statistics so don’t change or update your team just for the sake of it.

With respect to the fantasy basketball leagues on offer from the major players in the industry, such as the NBA, ESPN or CBS, you will find that a Draft-style league with Rotisserie Scoring and daily transactions are the most common.