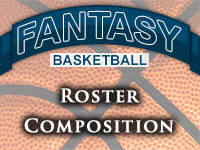 Once you have picked the sort of league that you want to be in, it is time to think about your team. Yes, your team name is vital and you probably have a lot of great ideas for that. If you are in a group with friends, you may want to choose an option that is highly offensive to one of your friends, this is the basis for around 94% of fantasy basketball names. If you are playing in a bigger league or one organised by a major firm, personal and in-jokes may not go down so well, so you may decide to choose a topical name or one that relates to you but in a more generic way.

Okay, now that you have eventually settled on a team name, you can relax, because this is by far the most important decision you will make. Would you rather be remembered for having excellent fantasy basketball skills or do you want to be remembered for having a funny team name? The funny team name option wins hands down for the majority of players but if you are looking to pick up points and trying to get a good score, the following information will be for you.

When you look at a basketball team, there should be a formation to the team, with players in different positions all doing their job. This is the same in fantasy basketball, so you should be thinking about your roster composition. Some leagues will force you to select players that will enable you to create a line-up with players in determined roles that meet the criteria for the league.

To keep things simple, many leagues copy the NBA standard line-up, which means that your team will consist of:

Some leagues offer a bit more flexibility in shaping your line-up, so if you want to feel free in composing your roster, make sure you pick the league that is right for you. These leagues will maybe just offer a Guard position, allowing you to choose between a Point Guard and a Shooting Guard. Similar options include choosing between Power Forward and a Small Forward for the Forward position and choosing between a Power Forward and a Center. These leagues will often offer up a Utility position, allowing you to place any player in your squad into that position.

The players that are on your bench will not score points or obtain statistics for you, so it is vital that you stay in touch with what players are likely to perform well and make sure that they are in your starting line-up.

Depending on the nature of your league, your ability to trade and waiver may differ, so again, check what sort of league you are in but you should find that there will be options to trade players between teams. If your league is small and competitive, you may even find that trades between teams have to be approved, or that they can be protested against by players who feel that a trade is unfair or unbalanced.

Players that haven’t been drafted are classed as “free agents” and these can be picked up by teams during the course of the season. Depending on the nature and rules of the leagues, these may be made available on a first come first served period at certain times, or there may be an order in picking up these players. It is also likely that if you have a full squad that you will need to let someone go before you bring someone else in. This will then make that player a free agent, allowing them to be picked up by another team in your league.