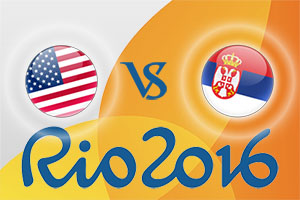 While the appearance of the United States in the Olympic Men’s Final in Rio isn’t a shock, some people will raise an eyebrow at the presence of Serbia. However, there is no denying that Serbia have been hugely consistent on the international stage of late and we are in for a grand final in Brazil this Sunday.

The scores in the semi-finals on Friday 19th of August were:

With the Serbian Women taking Bronze in the Women’s basketball tournament, and Serbia Men taking at least the Silver, this has been a huge tournament for Serbian basketball. Of course, the USA Women have another Gold Medal and the USA Men will be looking to join them.

You fully expect USA to come out and put on a show in the final but equally, Serbia aren’t going to roll over and let the USA take the Gold Medal. As was shown in the USA’s semi-final against Spain, they can’t just run away with game at this stage of the tournament unless their opponents collapse and the USA really push for success. The Americans have the players but Serbia have a great team spirit, which could allow them to push the Americans all the way.

With that in mind, look to back Serbia at +15.5, which you will find available at odds of 1.90. Anyone looking to get involved with the Over/Under market should look to go OVER 181.5, and this is provided at odds of 1.90. Bet Now!

For the best value in the Olympics Final, it may be best to look at the margin of victory. If you expect the USA to win by a margin of 7-9 points, back them at odds of 8.00. For a US margin of victory by a gap of 10-13 points, the odds are available at 6.00.