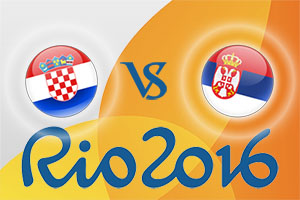 When it comes to modern rivalries, games between Croatia and Serbia always have an added edge about them. Without delving into the history of these two nations, this is a game that will have significant importance to many people from the two countries. The players will also know this and in this game, they are not just playing for themselves, they will be playing for their nation. This is perhaps something that is always the case when it comes to international tournaments but in games like this, it is at the forefront of everyone’s thoughts.

The two sides haven’t played since the 2010 FIBA Basketball World Cup, which was held in Turkey. Serbia won by a single point, 73-72 and they went on to take fourth spot in the tournament.

Croatia took top spot in Group B thanks to their head to head results against their main rivals and this is what has set up this tantalising clash. A 3-2 record isn’t normally enough to see you win a 6 team group but Group B was particularly tight, and the Croatians took full advantage of what was on offer. Bojan Bogdanović has been a massive player for the Croatians this summer and if he delivers in this game, the Croatians will have a strong chance of success.

Serbia progressed with a 2-3 record from Group A, grabbing wins against Venezuela and China. That isn’t the sort of form that will strike fear in the hearts of their opponents but sometimes getting through to the knockout round can provide a team with a new lease of life.

Croatia can take this tie

Serbia are actually the favourites for this game but look to take Croatia at +5.5, which is available at odds of 1.90. Anyone interested in the Over/Under market should choose to go OVER 155.5 which you can find at odds of 1.90. Bet Now!

The Race to 20 Points sees Croatia listed at 2.45 and in the Double market, backing Serbia half-time, Croatia full-time is available at odds of 9.00.