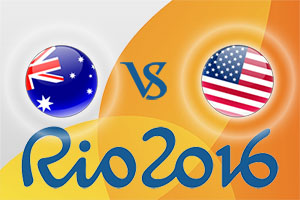 This is the game between the two teams with a 100% record at the top of Group A. This would usually be a mouth-watering clash with pundits and experts debating who will win the game and what will be the deciding factor in the match. Of course, this is a game involving the American side at the basketball so the biggest compliment the bookmakers can pay to the Australian side is that they think the score will be kept down to under 30 points!

This isn’t meant to be damning about the Australians, they have done very well in their two games so far, two very tough games and this match sees them facing an even tougher challenge. However, Australia will know that after USA they have two easier games (at least on paper) and no matter how badly this game goes, they’ll be well placed to progress in the tournament. Then again, this could be the time for an upset or at least lay down a marker for later in the tournament if the two teams are to clash again.

Patty Mills has been the top Australian scorer in their opening two games, with 21 points against France and 26 points against Serbia. If Mills has another big game on Wednesday, the Americans will at least know that they have faced a challenge on the court.

Paul George was the star American in the romp over Venezuela, with the player picking up twenty points. After two games, against lesser opposition, Team USA has a points difference of +101. Australia have a points difference of +36 after two games, but this is a tally which suggests how well they’ve done when you consider their opposition in these games.

Team USA should get home comfortably

The bookies haven’t been forthcoming with Prop bets for games involving the USA so far in this tournament and they aren’t changing this strategy in this game. If you need an additional bet, there are Odds or Even wagers available to bet on.