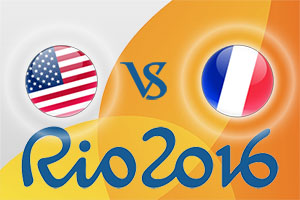 Group A concludes today in Rio and first up is the clash between first and third in the group, with both of these teams already assured of a place in the knockout round.

A win for France would see them go ahead of USA in the head to head scenario and in all likelihood, top the group. Yes, Australia could also get on to 9 points but they’d be taken out by the points total in the relevant match-ups. We may have three teams already through from Group A but there is still a lot of excitement to look forward to, even if France don’t pull off a major shock.

USA have a 100% record so far and no one expects them to fail in their bid to have a 100% record in the group stage. In saying that, the USA struggled in their last game, only winning by 3 points. Most basketball teams would be delighted in only winning by 3 points but the US players and fans will look for more than a 94-91 win against Serbia. Kyrie Irving providing 14 points in the win and perhaps the USA have taken their eye off the prize a little too early with respect to the group stages.

France were in much better shape in their last game against Venezuela where they managed to grab a 96-56 win with Joffrey Lauvergne offering up 17 points in the triumph. France will likely find points to be a lot harder to come by in this match.

Will the real USA show up?

Like with so many games, you don’t have any doubts about whether USA will win or not, you just wonder about the margin of victory. USA will win but they’ve been slowing down in recent games and they may just be looking to get over the line in the group stages before exploding in the knockout round.

A bet of France at half-time and USA at full-time is on offer at 6.00 if you expect the French to start strongly only for USA to roar back and claim victory at the death.