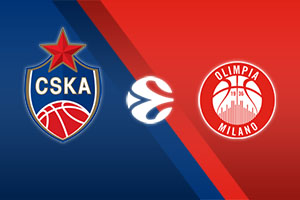 CSKA Moscow (18-9) suffered a rather harsh defeat in Turkey last week (100-70 to Efes) that will definitely be remembered for a long time… Coach Itoudis took immediate responsibility for the disappointing performance of his team and promised a reaction asap. To their advantage (as much as this can be defined as close to consolation), the Russians managed to maintain the difference of 35 points that they held in the A-round game, which gives them the upper hand in the event of a tie in the final standings table.

The “Team of the Army” has recorded three losses in the last five games. Still, they hold firm on the second place of the regular season, with one game less pending (that home game against Panathinaikos, which was cancelled due to Greeks suffering from multiple COVID-19 cases). The key Serbian Center Nikola Milutinov has been knocked – out until the end of the season, therefore missing tonight’s game also.

Being placed consistently in the top four league teams, Armani (18-10) will keep fighting for the home advantage in the upcoming playoffs. This season’s super valuable American guard Malcolm Delaney (10.3 points) is still out of battle and will miss tonight’s game as well. Still, a very useful addition to the team’s roster, Zach LeDay will make his return for the first time after a month.