Round of Last 16 Review

Saturday the 6th of September saw four teams make their way through the last 8 of the 2014 FIBA Basketball World Cup and Sunday saw the remaining four teams left in the tournament make their way through to the next round of the quarter final stages. The games on Sunday looked to be closer affairs, certainly if you believed the bookmaker odds, than the Saturday games and they tuned out to be rather interesting and exciting.

With just five points separating the two teams in the end New Zealand came close to giving Lithuania a big surprise in Spain. As it was, one of the most hotly tipped teams at the tournament held on for a 76-71 win but it wasn’t easy. A lot of the praise for the result has been heading towards Jonas Valanciunas, the big man from the Toronto Raptors, who showed up big time for his team. Jonas managed to grab 22 points and he picked up a total of 13 rebounds in the game. When you add in the fact that Donatas Motiejunas from the Rockets added 8 points and 8 rebounds as well, this was a team who were firing up front. Mind you, New Zealand had Corey Webster, who managed to contribute 26 points to his team’s valiant efforts. The Kiwis head home but they do so with a lot of praise after surprising and delighting a few people at this summer’s event. 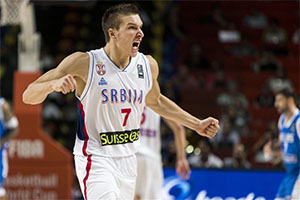 Greece may have delivered a perfect group stage performance but that 5-0 record counts for nothing now with Serbia picking them off in the round of 16. The 90-72 win for Serbia over Greece may have been a slight shock, going against the bookmaker odds for the match, but anyone that watched the game would have the opinion that the Serbian team were worthy winners. Bogdan Bogdanovic once again excelled, delivering 21 points, and he was joined in great point scoring form by Miroslav Raduljica, who managed to pick up 16 points. For Greece, Nick Calathes was once again the top player but his 14 points, and the 7 points from Bucks player Giannis Antetokounmpo were not enough to keep Greece in the tournament. When your overall record in a tournament stands at 5-1, if the 1 comes in a knockout match, that is the most important number of them all.

If you thought Lithuania versus New Zealand was close, it was nothing close compared to the Turkey versus Australia match. It was decided with five seconds left on the clock when Emir Preldzic delivered a sweet three point shot, which delivered a 65-64 win for the Turkish side. Preldzic served up 16 points in total to help provide the come from behind win that will leave Australia feeling rather sore and angry at the end of it all. Australia were confident about grabbing a medal in Spain but the only thing they are catching now is the plane home. Australia missed a lot of shots, especially from the free throw mark, where they managed to miss 9 of the 19 shots. The top scorer for Australia was Aron Baynes, who grabbed 15 points, and Matthew Dellavedova picked up 13 points.

Brazil kill off the Golden Generation of Argentina

In the end, it was easy for Brazil in a match where they knocked out their bitter rivals and probably brought the Golden Generation of Argentinean basketball to a close. Argentina were the stronger team in the first half but a resurgent Brazil upped the tempo and ante in the second, scoring 52 points in the second quarter when they only managed for 33 points in the first. Argentina have held the upper hand over Brazil in the past decade so this result was a sweet one for Brazil fans while it was a bitter pill for Argentina fans to swallow. The 86-65 result was probably indicative of Brazil’s class by the end of the game.

Raulzinho Neto was the top scorer for Brazil with 21 points while Pablo Prigioni delivered 18 points for the losing South American side.

This means the quarter final ties are:

The Basketball Betting crew will be attending the quarter finals in Barcelona. We have seats on row 4 behind the right team bench, seen from the court. Follow us on Twitter @BBallBettingUK for exclusive footage during both games on September 9th.