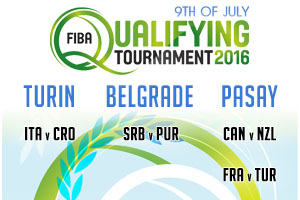 We have reached Final Day in the two European legs of the Olympic Qualifying Basketball tournaments, which mean that this is a day full of drama and excitement. In the Philippines, semi-final day has arrived, all of which means we are set up for a fantastic weekend of basketball action.

The action is running a day behind in the Philippines but people looking for an early start to their basketball watching activities in Europe or the UK will find that these two semi-final games provide an excellent starting point.

France are also well fancied to make it to the final and they should have more than enough to overcome Turley. Taking France at -12.0, with odds of 1.83, is a slight risk but if the French are up for it, this is easily within their reach. If you are looking for the Over/Under market, look to go OVER 144.5 which is available at odds of 1.83. Bet Now!

There was a shock in the opening semi-final in Belgrade with Latvia being hotly tipped to book their place in the final. Clearly, no one told Puerto Rico how things were supposed to pan out because they produced a performance that left Latvia stunned. The game finished Latvia 70 v 77 Puerto Rico with the Boston Celtics player John Holland providing 15 points in the victory.

In the other semi-final, things went more to plan and the hosts managed to win with a convincing margin. Serbia 96 v 72 Czech Republic was the final score with Bogdan Bogdanović, who has been playing for Fenerbahce in the Euroleague but has recently had his NBA rights traded to the Sacramento Kings, grabbing 21 points in the win.

While Puerto Rico pulled off a great feat in getting to this final, the bookmakers believe the hosts will win with a good bit to spare. After a convincing win over the Czech Republic, the Serbian side will be in full confidence but Puerto Rico may push them close to look to take Puerto Rico at +14.5, at odds of 1.83, even if Serbia clinch their spot in Rio at the end of it all. With the Over/Under market, look to go UNDER 166.5 which you can find at odds of 1.83. Bet Now!

We are shaping up for the Grand Final of the Turn leg of the tournament today and it looks set to be a big game. The hosts have managed to make it through to the final game but they are likely to face a tough challenge in the face of Croatia.

The Croatian side triumphed in the first semi-final, edging Greece in an excellent encounter. The game finished Greece 61 v 66 Croatia, with NBA star Bojan Bogdanović offering up 20 points in the game. He could well be the deciding factor in the final on Saturday night. There is a slightly interesting element to the two European finals in that there will be two players with the surname Bogdanovic leading the line and plenty of eyes will fall on Bogdan and Bojan to see if they can inspire their teams to victory.

In the other game, Italy were in full control against Mexico and the game finished Italy 79 v 54 Mexico. The hosts also had an NBA player in their midst, and Danilo Gallinari grabbed 15 points in the victory. There were over 10,000 fans in place to see the hosts win and the noise levels should be even noisier on Saturday night.

Both sides have NBA and Euroleague stars in their line-up and there is no shortage of experience in the two squads. This bodes well for a good game of basketball but when it comes to predicting a winner, there isn’t a lot between the two teams. You can see home advantage giving Italy a slight edge but of course, this is the time that nerves and expectations will be at their highest for the home team.

Taking Italy at -7, at odds of 1.83, should provide you with a strong interest for the game. If you are looking for the Over/Under market, look to go OVER 139.5 which is available at odds of 1.83. Bet Now!