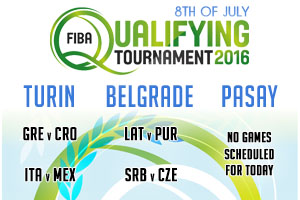 All of the group stages are now concluded as Manila prepares for the semi-finals tomorrow. Today is a day of rest for the successful teams in the Philippines but in Europe, the real action starts today and we have semi-final matches taking place in Belgrade and Turin.

Group A sees Canada and Turkey progressing to the knock-out round after Turkey grabbed a win on Thursday. The result was Senegal 62 v 68 Turkey. It may not have been a massively convincing win but it was more than enough to book their passage through to Saturday’s semi-final match. Canada topped the group with 3 points, Turkey finished with 3 points and Senegal go home with 2 points.

The other game in Manila on Thursday finished New Zealand 59 v 66 France. Again, France may have been tipped to win more convincingly but they got the win that saw them top the group. France finished with 4 points, New Zealand ended up with 3 points and the hosts finished bottom of the group with 2 points.

There is no action in the Philippines today but on Saturday 9th July, the semi-finals line up as follows:

We’re now at the most serious stage of the competition and the two games taking place this evening will go a long way to determining which nation from this tournament gets to enjoy the sights and sounds of Rio this summer.

Latvia should have enough about them to get to the final but the bookmakers think it will be a challenge. You should look to take Latvia at -6, available at odds of 1.83, in this game. Anyone looking at the Over/Under market will find that going UNDER 166.0, at odds of 1,83, is the smart bet for this game. Bet Now!

The winners will take to the court in Belgrade on Saturday to determine who is heading to Rio.

There are two good games lined up in Turin today and basketball fans are advised to check out these matches if they get the chance.

The Greeks start favourites in this game but both teams will fancy their chances. Take Greece at -4, at odds of 1.83, but no matter what happens, it should be a close and enjoyable affair. If you are weighing up the Over/Under market, be sure to go OVER 143.5, which is available at odds of 1.83. Bet Now!

The hosts are well fancied for this clash and it is easy to see why. You can find Italy available at -18.5, with odds of 1.83 available for this outcome. With the home crowd roaring the Italians on, you should find that they are able to put some distance between themselves and their Mexican opponents. For the Over/Under market, look to go OVER 145.0, which you can find available at odds of 1.83. Bet Now!

The two winning sides will clash in Turin on Saturday to determine who will take a place in Rio this summer.