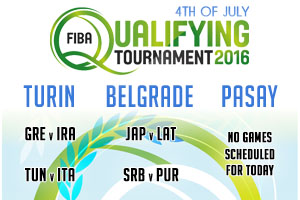 While the Olympic Games may still be a month way, basketball fans have the chance to get excited early with the final qualifying spots up for grabs this week. We have already detailed the Olympic Qualifying tournaments in great detail, so if you need to get up to speed you can do so on site, but if you are just looking to get involved with the basketball action, let’s waste no more time.

The two groups based in Europe get us underway with games taking place at 5pm and 8pm BST on Monday the 4th of July. The action in the Philippines gets underway on Tuesday the 5th of July so we’ll return to that tomorrow, allowing us to focus on the first day action that is taking place in Europe today.

As you would expect, the Greek team are massive favourites for this match, so much so that for the money line, they are listed as 1.005 to win the game. There is absolutely no value in taking the Greeks to win but the spread on Greece at -24.5 which is available at odds of 1.83 is well worth considering.

As the opening game of the group, the Greek side will be looking to lay down a marker and knowing that they have a day off tomorrow before facing Mexico on Wednesday, there is no need for Greece to take things easily. Points difference and points scored could come into the equation so there is no point in Greece starting off in a relaxed manner. If you are looking at the Over/Under market, look to go OVER 145.5 at odds of 1.83. Bet Now!

If you thought the Greeks were big favourites to win their game, you haven’t seen anything yet as the Italians are even more hotly tipped to defeat Tunisia. The spread is focused on 29.5 points but there are a couple of things to consider. Yes, Italy are at home and they’ll be desperate to get the home crowd behind them as quickly as possible.

However, Italy play again tomorrow against Croatia, who have a day off tomorrow, which means that the Italian clash is their opening game. It may be that the latter stages of this game sees the Italians easing off with one eye on their most important game and with that in mind, expect a comfortable Italian win but take Tunisia at +29.5 which you can find at odds of 1.83. The Over/Under market is available at OVER 151.0 at odds of 1.82. Bet Now!

As one of the favourites to make it to Rio, it is no surprise that many predict Serbia to romp their group, not just this game. With a rest day on Tuesday, expect Serbia to be focused on this game and take Serbia at -17.5 at odds of 1.83. If you are looking for the Over/Under market, look to go OVER 149.5, which you can find at odds of 1.83. Bet Now!