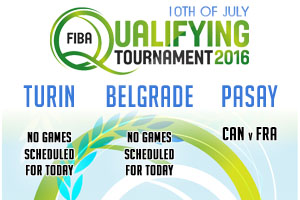 On an eventful Saturday, two teams booked their passaged to Rio, resulting in wild scenes in Europe. We haven’t finished yet though because the Manila leg of the qualification process reaches its climax today, which means that we still have plenty to look forward to today.

With one game left in the Olympic Basketball qualification process, all focus is on Manila to see who will be the final team to clinch a spot in Rio.

The Canadian team got the job done against New Zealand and while it wasn’t as convincing or as comfortable as they may have liked, they have a spot in the final to look toward to. Cory Joseph, a player with NBA experience with the Toronto Raptors, was the key player with 23 points. The score was level at half-time, but a narrow second was taken by the Canadian side and that is why they are involved in the final game on the road to Rio.

France once again lived up to the billing and hype of being favourites with a confident win against a Turkish side that was geared up to cause an upset in Manila on Saturday. Thomas Heurtel, one of the key players of the Euroleague with Anadolu Efes Istanbul was the top man for France with 17 points.

The French side took every quarter in this close game. They never ran away with it at any point but they always remained in charge by enough to remove any doubts or concerns about the outcome of the game.

It is fair to say that France are the favourites for this tie, they are already classed as one of the favourites (when you ignore the USA) for the tournament in Brazil, and they haven’t qualified yet! The results in the tournament has shown us that many games have been closer than you’d predict on paper but you get the feeling that France will want to finish with a flourish.

With the French football team playing in the final of the European Championships soccer tournament today, this is a chance to create a day of celebration that France will always remember and the basketball team will be in no mood to let the nation down.

Things were straightforward in Belgrade as the home team won through in convincing fashion, having the game sewn up long before the end of the match. The home crowd were in joyous mood as Serbia booked their spot in Rio next month.

Bogdan Bogdanović delivered 26 points in the win and while José Juan Barea provided 22 points for the losing team, it wasn’t enough to derail Serbia in their quest for Olympic status. With a first quarter that ended up 37-11, the hosts were in complete control and another dominant second half ensured the game was over as a contest by the time we reached the halfway point. The 60-267 score at the break was a fair indicator of Serbia’s dominance and while Puerto Rico rallied in the second half, the result was never in doubt.

There was a huge shock in Turin with the home side losing out in Overtime. There was anguish for the Italians but it kicked off a night of celebration for the Croatian team who overcame the odds to book their place in Rio this summer.

As with the semi-final, Bojan Bogdanović was the key man for the Croatian side and he managed to deliver 26 points in the win. Over the course of the tournament, this player managed to grab an average of 23.7 points per game, making him a huge reason in why Croatia managed to make it all the way to the final, and to Brazil next month. Marco Bellini offered up 18 points for the hosts but this wasn’t enough to win the game and the loss in overtime will likely haunt the Italians for a long time to come.