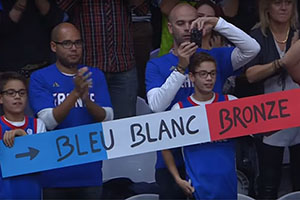 It wasn’t the Sunday victory that French basketball fans were dreaming of from the final day of the 2015 EuroBasket tournament but the hosts ensured that the local fans in Lille were able to celebrate a bronze medal finish.

The final score in the third and fourth play-off match on Sunday 20th September was:

The second and third quarters were the quarters that made the difference in this game, with France opening up a strong lead that they held on to comfortably in the final quarter. The first quarter was tied at a score of 16-16 but at this point, the French found an extra gear or two and the Serbians were unable to live with the power and energy of the hosts in Lille.

France were dominant at times

Serbia took a 27-28 lead late on in the second quarter but the French undertook a line-up change, using Nando De Colo as their only guard and it paid dividends, racking up a 10-0 scoring run which put them fully in control. This allowed the French to take a 37-28 lead into half-time.

As you would expect, Milos Teodosic battled to keep his site in it and near the end of the third quarter, he reduced the deficit to 5 points but this led to France blocking out Serbia for four minutes as they went on a 9-0 scoring run that saw them fully in control at 53-29 with just over 2 minutes left of the third quarter. The home crowd were in full voice at this point and there was no doubt that there would be some joy for the French at the end of a tournament that promised so much.

Serbia battled back but the Serbians were in full control

Serbia came back into it in the fourth quarter but by this stage, France were in complete control and you got the impression they would have stepped things up again if they were in any danger.

Evan Fournier was in great form for the French side, allowing Vincent Collet to rest Nando De Colo and Tony Parker at times without risking the French side’s dominance. Fournier picked up 15 points, a senior international career high for the player, while also adding five rebounds and two assists.

It can be difficult to second-guess how these matches will pan out but there was something about the French team playing in Lille which meant you knew they were going to give it their all. The players stated that they were determined to give something back to the fans who had provided them with tremendous backing in the tournament and their performance in the bronze medal game was fitting of the backing they received.

In another country, Serbia may have had more of a chance of grabbing the bronze medal but it looked a game that was France’s to take, and so it transpired. Both nations know that they are involved with the qualifying tournament for the 2016 Olympics being held in Rio.