The 2013 EuroBasket was the 38th event of the nature and it was held in Slovenia between the 4th of September and the 22nd. In total, 24 teams battled through to the main event. The 2011 event was hosted in Lithuania, an event which Spain clinched their second title. Spain were one of the teams at the 2013 event, aiming to retain their crown.

Eight teams qualified automatically to the 2013 EuroBasket event. These teams were:

Slovenia qualified as host nation and the remaining teams were automatically qualified due to participating at the 2012 London Olympics or through being part of the qualification process for the Olympics.

This left 16 places up for grabs and the qualification process took place between August and September in 2012. 31 teams were placed into 6 groups, one group of 6 teams and 5 groups of 5 teams. The top 2 teams from each group qualified automatically and the top 4 ranked third placed teams (based on win percentage) qualified as well.

All of the qualifying teams were placed into 6 different pots with one team from each pot being placed into one of the four groups that made up the first round.

The group winners included Montenegro, Germany and Croatia. The other group winners were Italy, Poland and Bosnia & Herzegovina. The runners up in the groups were Israel, Sweden and the Ukraine. Georgia, Finland and Turkey were the other second placed teams in the group. These teams were joined by the top four ranked teams in third position. These teams were Belgium, Latvia, Serbia and the Czech Republic. This finalised the 24 teams that would play out for EuroBasket 2013 in Slovenia.

The games in Group A were played at the Tivoli Hall in Ljubljana and the group consisted of France, the Ukraine, Belgium, Great Britain, Germany and Israel. The three qualifying teams were France, Ukraine and Belgium.

The games in Group B were played at the Podmežakla Hall in Jesenice and the group consisted of Serbia, Latvia, Lithuania, Bosnia & Herzegovina, Montenegro and Macedonia. The three qualifying teams were Serbia, Latvia and Lithuania. 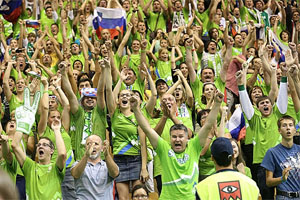 The games in Group C were played at the Zlatorog Arena in Celje and the group consisted of Spain, Croatia, Slovenia, Czech Republic, Georgia and Poland. The three qualifying teams were Spain, Croatia and Slovenia.

The games in Group D were played at the Arena Bonifika in Koper and the group consisted of Italy, Finland, Greece, Sweden, Turkey and Russia. The three qualifying teams were Italy, Finland and Greece.

The next round saw the 12 qualifying teams, split into two groups of 6 teams with the top 4 teams progressing. These groups were labelled E and F.

All of the games in the knock-out stage of the tournament took place in Ljubljana. The 8 teams were placed into a knockout round situation, with the pairing as follows: 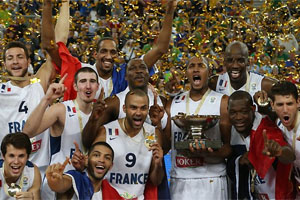 The Most Valuable Player award for the tournament was awarded to Tony Parker from France. Parker achieved a PPG of 19.